Hire for Attitude, Train for Skills. Sounds Good, But

There are few sayings that are as popular and trendy in management circles today as, “Hire for Attitude, Train for Skills.”It is also stated as:

In a nutshell it means that when you are recruiting, look for people with a (good) attitude — traits like enthusiasm, humility, work ethic, integrity, initiative, passion — because these kinds of personality traits are virtually impossible to learn. Usually you either have them or you don't. Experience, skills and qualifications, on the other hand, can be acquired more easily.

It doesn't mean that you should go about hiring an enthusiastic 1st year medical student as a brain surgeon. "Hire for Attitude" is largely about challenging managers' current addiction to using previous job experience as their primary screening criteria.

Recruiters and HR managers will often advertise that the right candidate needs to have "a minimum of 3-5 years industry experience," when in fact none is needed — what they really need is someone who is good with customers on the phone and has a bit of common sense.

Job experience, however, is given the highest priority and placed at the top of the list of hiring criteria. If you don't have it, you won't even be given the chance to be interviewed. "Hire for Attitude" asks managers to re-consider an important question: what is more important for success in this role: inherent attitude or previous job experience?

“We'll train you on whatever it is you have to do; but the one thing Southwest cannot change in people is inherent attitudes."

There are a myriad of arguments for the benefits of having people on board with a good attitude — but that would require another article (book?). We think the single best example comes from the source of the quote.

“Hire for Attitude, Train for Skills” is originally attributed to Herb Kelleher, one of the co-founders of US-based Southwest Airlines. When Kelleher became chairman in 1978, he charged the People Department (aka HR) with the responsibility of hiring people with a sense of humour. "I want flying to be a helluva lot of fun!" And so humour was placed at the top of its list of hiring criteria.

The idea went further than just humour, as Kelleher encouraged employees to have fun with customers — something that no doubt would have sounded very strange to people at the time, especially to those who had been raised to believe that humour is unprofessional and silly in the workplace. But the chairman believed that failure to nourish people with a great attitude undermines productivity, creativity, and morale; whereas encouraging it increases customer satisfaction, operational smoothness, engagement, retention and ultimately profits.

(Got to love the last line: "You will not get that on United Airlines, I guarantee you.")

Southwest has gone on to become the most successful company in American aviation history. They remain the company that best embodies the “Hire for Attitude” mentality as a cornerstone of their business plan, and the one that other companies look to for developing similar recruitment and training strategies.

The "Hire for Attitude" sentiment is starting to be echoed by other leaders . . .

“We've turned waiters and waitresses into great mortgage bankers. We've hired soap-opera actors and electricians. We can teach people about finance. We can't teach passion, urgency and a willingness to go the extra mile."

“Don't hire [bankers]… I'd rather hire a jazz musician, a dancer, or a captain in the Israeli army. They can learn about banking. It's much harder for bankers to unlearn their bad habits."

All Talk and No Walk?

There is a good case for "Hire for Attitude," but that doesn’t mean it is common knowledge — or widely practiced. According to a 2010 Hudson Global Resources Report, "Only 30% of employers focus on richer methods of interviewing such as behavioural interviewing and personality testing. More sophisticated methods that look at motivation and career fit are hugely under-utilised at only 7%".

The idea of "Hire for Attitude" is simple and easy to believe in, but hard for many organisations to implement.

Why is it hard?

There are many reasons, but we think there are four at the heart of the matter:

"Hire for Attitude, Train for Skills" sounds good, but are companies putting it in the too hard basket? 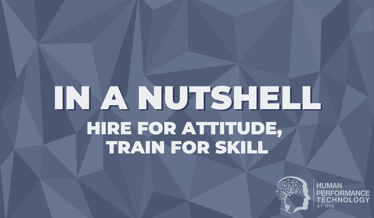 In a Nutshell: Hire for Attitude, Train for Skill

Most Popular Blog Posts of 2012