In a Nutshell: 6 Principles of Influence

The 6 principles of influence (or the 6 weapons of influence) is a phrase coined by psychology professor Robert Cialdini in his 1984 bestseller, "Influence: The Psychology of Persuasion,” which has remained the most popular book on social influence since publication. It is a well-known text among marketers and salespeople, but can be seen as an extremely valuable set of insights that can benefit anyone in any type of business environment.

Self-described as an “easy mark” for salespeople, Cialdini had always been intrigued by how “compliance professionals” (salespeople, fund-raisers, recruiters, marketers, etc.) were able to use certain tactics to influence people’s decisions and persuade them to buy their product, pitch or proposal. As an experimental social psychologist, he began conducting research to work out which tactics were most common and most effective, for the most part in his laboratory and with college students. Over the course approximately 3 years this was combined with interviews, observations and other interactions with compliance professionals. From this research, Cialdini discovered that “Although there are thousands of different tactics that compliance practitioners employ to produce ‘yes,’ the majority fall within six basic categories. Each of these categories is governed by a fundamental psychological principle that directs human behaviour and, in so doing, gives the tactics their power.”

The 6 principles of influence are presented as the most basic and broad psychological principles that are used to win people’s consent, cooperation and commitment.

“The rule says that we should try to repay, in kind, what another person has provided to us” (p 17). An example of this principle involved an experiment done on a university campus with two students (one an actor) who rated pieces of art together. During a break, the actor would leave the room and return with two bottles of Coca-Cola, offering one to the student. Later on, the actor would ask the student to buy some raffle tickets, which he was much more successful at doing if he had given the student a free Coke (as you might expect). However, the researchers found that, for students who indicated they didn’t like the actor, they would still purchase more tickets than those who weren’t offered the free drink. The compulsion for reciprocity was so strong that it overwhelmed the relationship factor. "By virtue of the reciprocity rule, then, we are obligated to the future repayment of favours, gifts, invitations, and the like" (p 18).

2) Consistency (people want to remain consistent with past behaviour, choices or statements)

“It is, quite simply, our nearly obsessive desire to be (and to appear) consistent with what we have already done. Once we have made a choice or taken a stand, we will encounter personal and interpersonal pressure to behave consistently with that commitment” (p 57). One example is given of an experiment in which house owners were approached to place a very large sign on their front lawns that said “Drive Carefully” as part of a public-service initiative. 83% rejected the offer. However, when people were approached 2 weeks earlier to put a little 3-inch-square sign in their windows that read “Be a Safe Driver,” 76% accepted when asked to put in the larger sign. Little requests in the beginning can lead to gain eventual compliance with larger requests.

3) Social Proof (people want to know what others think)

“It states that one means we use to determine what is correct is to find out what other people think is correct” (p 116). Probably the most common example of this principle is customer testimonials used in infomercials. Another is the use of canned laughter or laugh tracks in TV sitcoms. Despite many people saying that it sounds phoney, the research shows that it causes audiences to laugh longer and more often.

“As a rule, we most prefer to say ‘yes,’ to the requests of someone we know and like” (p 167). For example, research findings indicate that people are more likely to buy from good-looking people, vote for good-looking politicians and hire good-looking candidates. We also tend to like people who are similar to us in some way, for instance if we know they have the same hobby or grew up in the same suburb.

An example is provided in the famous experiment conducted by Stanley Milgram who measured the willingness of study participants to obey an authority figure who instructed them to give an escalating series of shocks to a person (played by an actor) whenever they answered a question wrong. They found that 65% of participants would go to the end and carry out maximum shock (450–volts) — enough to kill — if instructed to by an authority figure despite the screams of the victim. Milgram said, “It is the extreme willingness of adults to go to almost any lengths on the command of an authority that constitutes the chief finding of the study.”

“As a rule, if it is rare or becoming rare, it is more valuable" (p 239). For instance, stamps, coins, or comic books (and other collectors items) that only have a small number in circulation are worth many times their market value. This rule is used most often with “limited time” or “limited stock available” offers, since people don’t want to miss out. In fact, people are much more likely to act on a potential loss than a potential gain. For example, homeowners told how much money they could lose from inadequate insulation are more likely to insulate their homes than those told how much they could save.

Cialdini suggests that many of these six principles can be used effectively in isolation or together in combination, but working out which ones to use will ultimately depend on what you are trying to achieve. He reminds people to be careful about how they use the principles — it is very easy to use them to mislead or deceive people. Just being aware of the principles, however, is a major step towards preventing yourself from being taken advantage of from someone who might apply them in an unethical manner. 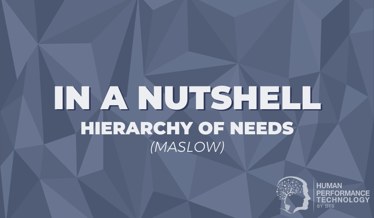 In a Nutshell: Hierarchy of Needs (Maslow)