Behavioural interviewing does not have any single known originator to whom the method belongs, but seems to have emerged as a popular and widespread approach all over the world around the mid-to-late 1990s. It has since become the “gold standard” interviewing practice for hiring managers and recruiters.

Behavioural interviewing is a questioning technique used in job interviews by hiring managers, in which they ask the candidate to provide very specific examples of past behaviour in a previous role that would help to illustrate the use of a particular skill or skill set that is important for success in the new role. The approach operates on the premise that "the best predictor of future performance is past performance."

Instead of asking hypothetical, general or vague questions to candidates, which is common in many job interviews, the interviewer instead asks, “How did you behave?” An example of a hypothetical question would be, “Are you willing to work hard?” whereas a behavioural-based question would be, “Give me an example of a specific time when you had to put forth extra time and effort to reach a deadline.”

One of the most common models that candidates are advised to use in response to behavioural-based questions is STAR:

The STAR model is not the only version used. There are several others, but they generally all follow the same underlying approach:

For example, when answering interviewing questions some people advise candidates to spend roughly 20% of their answer on describing the situation/task; 60% for the actions taken, and 20% on the results achieved.

Interviewers that use a behavioural-based questioning approach are usually interested in targeting “core competencies” — specific skills that are most critical to performance. Core competencies will vary from job to job. These might include things like:

How a core competency is defined will depend on the organisation as there is no “universal” set of core competencies and definitions. 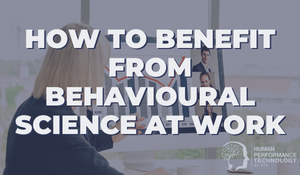 How to Benefit from Behavioural Science at Work