In a Nutshell: Intrinsic Motivation

Daniel H. Pink published the bestselling business book “Drive: The Surprising Truth About What Motivates Us” (2009), which provides a comprehensive summary of nearly half a century of scientific research on human motivation, and suggests an apparent “mismatch between what science knows and what business does.”
The book is not seen so much as a radically new or ground-breaking set of ideas in itself, but is an excellent exploration of current motivational theories and a recapping of past research including Maslow, Herzberg, and McGregor.

Pink is perhaps best known for launching the three key principles of intrinsic motivation into the public spotlight: autonomy, mastery, and purpose. These terms (including "intrinsic motivation") are essentially a revamping of the core parts of self-determination theory (SDT), initially developed by Edward L. Deci and Richard M. Ryan in the 1970s and expanded by others, which is a theory of human motivation concerned with three basic psychological needs: autonomy, competence, and relatedness. (SDT is described by Pink on pages 68-71.)

Awareness surrounding the importance of intrinsic motivation was initially spread to the broader public by Pink’s influential TEDTalk: The Puzzle of Motivation (2009), one of a small group of TEDTalks to have amassed more than 1 million views on the TED website.

Pink suggests that the literature on human motivation can be split into 3 distinct categories:

To put these ideas into context, Pink discusses the recent transition from “algorithmic” to “heuristic” work. The former category has a clear, established set of instructions, like the kind performed by a grocery checkout clerk, while the latter requires adaptation and creativity, like the kind performed by advertisers working on a new product campaign. Pink brings to light experiments showing how a financial incentive (extrinsic) can act as an effective performance aid for simple algorithmic work but can actually act as a performance inhibitor when the task is of a heuristic nature (intrinsic).

In the age of the knowledge worker, Pink says that companies must find ways to embrace intrinsic motivation if they want to compete for the brightest talent and get the best out of their people, otherwise they will find themselves made obsolete over the coming decades by companies willing to offer employees more control, opportunities to grow, and to contribute to the world in more meaningful ways.

Even though intrinsic motivation is considered to be a more sustainable form of motivation than extrinsic motivation, corporations still tend to focus largely on external rewards to motivate workers. Why? Pink suggests it is mainly because it has always been this way (a relic of the industrial age), also because it is relatively easy in practice to implement, and because it would seem to make sense to reward the kinds of behaviours you want more of and punish the behaviours you want less of, otherwise known as the “carrot-and-stick” approach.

A great case study used by Pink to cast doubt on the "rational" carrot-and-stick approach is the emergence of Wikipedia. Putting the business models of Wikipedia and Microsoft's Encarta side-by-side in 1995, few would have expected the version in which subject matter experts paid for their contributions would lose out to a model in which everyday people were asked to give up their time for free — and potentially leave the website riddled with inaccuracy. The crowd-sourced Wikipedia should never have succeeded in a traditional economics model where people are viewed as rational, "profit-driven maximisers," but that’s exactly why Pink argues that businesses are operating on an incomplete model that fails to account for our basic psychological make-up — neglecting to see people as emotional, "purpose-driven maximisers."

Pink details several progressive companies’ attempts to embrace intrinsic motivation in the workplace and the benefits it can offer to engagement, retention, productivity, innovation and profit.

In keeping with the rise of disruptive social media platforms like Twitter, Pink summarises his book on page 218 for those looking to distil the message into a tweet: “Carrots & sticks are so last century. Drive says for 21st century work, we need to upgrade to autonomy, mastery & purpose.” 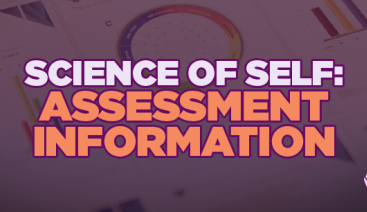 Science of Self: Assessment Information

What is TriMetrix EQ® and the “Multi-Science” Approach