In a Nutshell: Level 5 Leadership

Level 5 leadership was introduced by Jim Collins in his 2001 book “Good to Great” — one of the most influential business management books of all time.

“Good to Great” is about one of the most extensive business research studies ever undertaken, which began in 1996 and took 5 years to complete. Collins and his 21-member research team identified 11 great companies from Fortune 500 stock market data. The actual selection criteria for the 11 great companies was defined as: “15-year cumulative stock returns at or below the general stock market, punctuated by a transition point, then cumulative returns at least three times the market over the next 15 years.”

Each "great" company was carefully matched with a rival "comparison" company, with similarities in business, size, age, customers, and performance — in essence, one that had equivalent potential, but for whatever reason did not make the leap to greatness. The book is about understanding what specific factors were present that separated the great companies from the average ones, and in the process dispelled many myths about how the breakthrough to greatness occurs.

There were many insights discovered during the lengthy research phase, but only the most important findings were given their own chapter. In total, Collins' team ended up with 7 primary insights. Interestingly, of these 7 insights, Collins chose to single out Level 5 leadership for a Harvard Business Review article in 2001 titled “Level 5 Leadership: The Triumph of Humility and Fierce Resolve.” HBR has included the article in their list of “10 Must Reads on Leadership” to underline the belief that it is a concept all people with an interest in business management should be familiar with.

“Level 5” leadership is defined by Collins as an executive who “builds enduring greatness through a paradoxical blend of personal humility and professional will.”

Collins goes on to say, "It's not that Level 5 leaders have no ego or self-interest. Indeed, they are incredibly ambitious — but their ambition is first and foremost for the institution… they will sell the mills or fire their brother, if that’s what it will take to make the company great."

Level 5 leaders can be seen as servant leaders with an added dimension. Collins points out that “it is very important to grasp that Level 5 leadership is not just about humility and modesty. It is equally about ferocious resolve, an almost stoic determination to do whatever needs to be done to make the company great.” 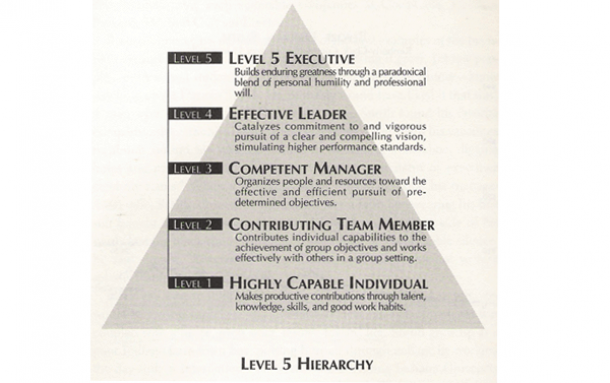 Leaders at the other four levels in the hierarchy can produce high degrees of success but not enough to elevate companies from mediocrity to sustained excellence. Collins provides Darwin E. Smith, the CEO of Kimberly-Clark for 20 years, as a classic example of a Level 5 leader. Smith was described as very humble and self-effacing yet had a fierce resolve.

Collins contrasts Level 5 leaders with many of the charismatic, egocentric leaders found at the helm of the less successful comparison companies. Collins notes that one of the more damaging trends in recent history has been the tendency among boards to hire charming personalities and overlook Level 5 leaders.

Why the Obsession with Engagement 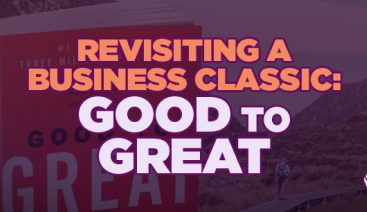