In a Nutshell: Motivation-Hygiene Theory

Frederick Herzberg (1923-2000) published the “two-factor” theory of workplace motivation — more commonly known as the “motivation-hygiene” theory — in his book entitled “The Motivation to Work” (1959).The motivation-hygiene theory is important to understand from the historical context in which it originated. During the 1950s, Herzberg and several of his colleagues conducted a review of the literature on workplace motivation as part of a grant initiated by The Buhl Foundation to better understand work attitudes, due in part to the prevalence of strikes, slow downs and other workplace grievances. From this review, an initial hypothesis was proposed that there were two different sets of factors impacting people’s feelings toward work — one set leading to very positive attitudes, and another set leading to very negative attitudes. The researchers theorised that these factors existed on separate continuums, which they sought to understand and explain.

In a major study involving interviews with 203 accountants and engineers, Herzberg’s team asked participants to describe situations when they felt either exceptionally good or bad about their job. These stories were then categorised into high and low sequences. High sequences had a high impact on job attitude, and low sequences had minimal impact on job attitude, ranked on a scale of 1-21.

Herzberg found that a certain group of factors (like pay and security) would frequently cause extreme dissatisfaction if they were not met, but this same group of factors would not cause feelings of extreme satisfaction. Herzberg discovered that his ideas roughly paralleled Maslow’s theory of self-actualisation, in that there were a group of “higher order” needs, such as recognition, self-esteem and personal achievement that mattered more to job satisfaction.

The motivation-hygiene theory suggests that there are certain factors involved in producing job satisfaction (motivation), while there are a separate and distinct group of factors that lead to job dissatisfaction (but not to motivation).

The two types of factors may be listed as follows, in general order of importance: 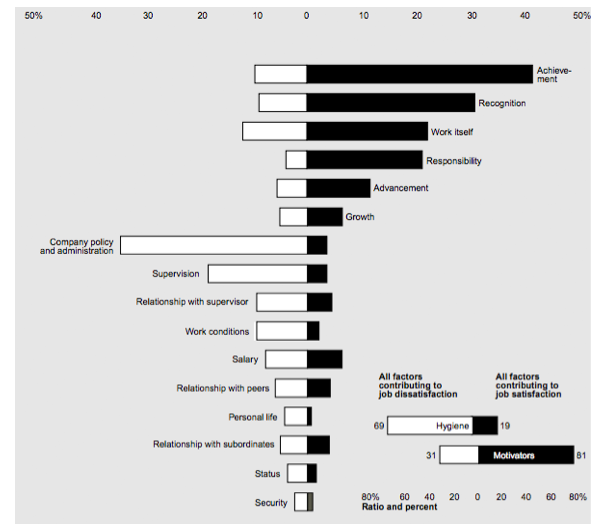 (Source: “One More Time: How Do You Motivate Employees?” Frederick Herzberg, Harvard Business Review, 1987. Drawn from samples of 1685 employees.)

Both groups contribute to motivation, but in different ways. The hygiene factors have an end-point — once they are fulfilled they cease to be motivating. The motivators do not have a definitive end, and will continue to generate a source of long-lasting energy and drive.

People may be temporarily buoyed by a pay increase, but after a short time they will become comfortable and the positive feelings will wear off. However, salary can be a significant de-motivator when the employee perceives it to be too low compared to that of their peers.

In other words, the hygiene factors (like salary) will "tick you off" if your employer doesn't get them right, but they are not sufficient enough by themselves to bring about the type of engagement and productivity sought by most companies.

It is important to understand that the two types of factors are not mutually exclusive and that management must try to fulfill both types of needs for an employee to be truly satisfied with their job.

Herzberg’s theory has made a significant and valuable contribution to employers’ attitudes on how to motivate their workforces. The basic tenets of the motivation-hygiene theory provide insight into areas managers can influence in order to increase the satisfaction and engagement of their employees.

A Timeline of Big Ideas on Motivation