In a Nutshell: Situational Leadership

Situational Leadership® is one of the most well known and widely used models in leadership development training.According to The Center for Leadership Studies, the company that owns the trademark, it has been used to train more than 14 million managers across the globe and is deployed in 70% of Fortune 500 companies.

The model was originally co-developed by Dr. Paul Hersey, author of “The Situational Leader” (1985), and Ken Blanchard, author of the business classic “The One Minute Manager” (1981), while they were working together at Ohio State University in the late 60s. However, since then, the model has undergone a number of refinements and changes to its terminology over many years. Not every manager who uses the tool in their workplace may be aware, but there are actually two main versions of the model in circulation around the world that look almost identical in layout and have overlapping descriptions in some areas, but also diverge and conflict in others. The reason for this odd disparity can be found in its history.

Hersey and Blanchard first introduced the model in an article called “Life-Cycle Theory of Leadership” for the ASTD Journal in 1969. According to Blanchard, the theory was originally inspired by Bill Reddin’s 3-D Leadership Model and Blake and Mouton’s Managerial Grid. The name “Life-Cycle” was inspired by parents’ need to change their leadership style as their children progress through infancy, adolescence and adulthood. The model, later changed to Situational Leadership® in the 1972 edition of “Management of Organisational Behaviour” (Hersey, Blanchard and Johnson), introduced four main styles of leadership: TELLING, SELLING, PARTICIPATING, DELEGATING. Hersey and Blanchard continued to work together on the model until the late 70s, at which point Blanchard sought to develop a new iteration as part of the formation of his new training company, and the two split over the best way to define the model.

In 1985, Hersey published the book “The Situational Leader,” still regarded by many as the "go-to" reference guide on the subject. In the same year, Blanchard co-wrote a book called “Leadership and the One Minute Manager” and introduced a revised version of the model called “Situational Leadership II” (SLII®).

SLII is, for the most part, very similar to the original model. It uses the same basic four-quadrant layout, although Blanchard renamed the four main leadership styles DIRECTING, COACHING, SUPPORTING, DELEGATING. The most important revision has to do with the description of the followers. Follower "readiness," previously follower "maturity," was again changed to “development level” and became a combination of “competence” and “commitment.” Blanchard also used the terms “enthusiastic beginner,” “disillusioned learner,” “capable but cautious performer” and “self-reliant achiever.” Hersey disagreed with several aspects in this new approach, which are too detailed to list here. (See sources.)

In our overview below, we will be using the terminology from the first model as outlined by Hersey in “The Situational Leader.” Regardless of which version is preferred, Situational Leadership as a general theoretical framework has proved to be immensely popular with managers over the years because it is simple to understand and practical to apply in any kind of work environment.

The Situational Leadership theory suggests that there is no single "best" style of leadership and that either highly directive (task) behaviour or highly supportive (relationship) behaviour is dependent on the “readiness” level of followers, which is a combination of their ability and willingness.

Effective leadership requires that managers start with the readiness level of followers and then match the appropriate leadership style to suit their needs.

For example, some followers may have all the necessary skills and motivation to perform a task, in which case this would require the “delegation” style (S4), where the leader probably does not need to closely scrutinise the worker’s every move. However, other followers may have none of necessary skills or motivation, in which case this would require the “telling” style (S1), where the follower would need to be told exactly what to do and how to do it, and then have their performance closely supervised.

It does not mean that leaders should pick one grid to apply to each employee forever as a static approach. Effective leaders are seen as being able to move around the grid and adapt their behaviour to the readiness level of each individual team member, perhaps switching between quadrants several times over the course of a day. 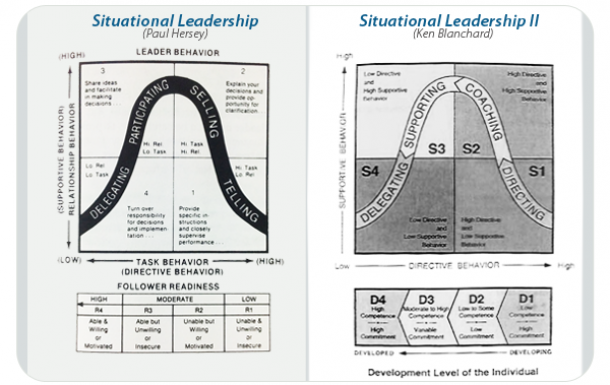 “Situational Leadership®” is a registered trademark of The Center for Leadership Studies, Inc.

“Situational Leadership® II (SLII®)” is a registered trademark of The Ken Blanchard Companies.

For more information, please see below. 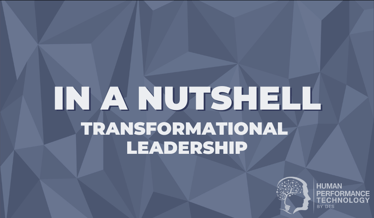 In a Nutshell: Transformational Leadership