Stephen Covey: His Most Important Idea

We’ve previously written about Stephen Covey’s favourite idea, the freedom to choose. But this article is about his most important idea, which often sneaks away unnoticed behind more popular terms used in everyday business conversation such as paradigm shift, emotional bank account, win-win, proactive, begin with the end in mind, and seek first to understand.All of these ideas are worthy and deserving of attention, mind you. It’s just that they’re inferior. Secondary. Spin-offs. Byproducts. They are overruled by a more important idea; the very foundation upon which all the habits are built. The material in every book you will ever read on leadership, self-help and personal development that deals with how to be more effective and successful is secondary to acknowledging this first truth. And that idea is universal principles (or natural principles).

“To expand, a principle is a natural law like gravity. It’s different than a value. Values are subjective; principles are objective. Gravity… if you drop something, gravity controls it. If I don’t tell you the truth, you won’t trust me — that’s a natural law. If I tell you the truth consistently and try to live it and apologise when I don’t and try to get back on track, then I’m living a natural law-repentance, making improvements, showing change.” — Covey

Universal principles are basic, self-evident, and understood by children in all countries on earth from a very young age, regardless or their religion or culture. They include respect, fairness, humility, discipline, integrity, honesty, compassion, etc. In other words, these are timeless virtues, although we tend to be more adept at recognising their counterparts: laziness, arrogance, vanity, greed, selfishness, etc. (At least in others, anyway.)

While The 7 Habits is often used in leadership development programs for corporate managers and CEOs, it is not just a book for businesspeople. It’s about how to function as an effective human being. More basic still, it is about how to be a good human being. From Covey’s perspective, one only becomes effective as a result of being good, not the other way around.

The habits were selected by Covey as examples of behaviours that he believed would tend to produce the most effective results over the long-term, but only because each one was based on timeless principles. He notes that he didn’t come up with the idea; it’s not some new theory. The principles have been discussed for thousands of years, but he had become particularly worried by the rate at which they were being eroded by modern society and being replaced by business “pseudo-values.”

As part of Covey’s doctoral dissertation, he studied the “success literature” of U.S. history that spanned 200 years of writing and discovered something that deeply disturbed him. There was a explosion of literature, beginning in the early-to-mid 1900s, that was obsessed with creating an attractive personality, thinking more positively, believing in yourself, developing more polished social skills and “get rich quick” schemes. He termed this philosophy the “Personality Ethic” and included books like The Power of Positive Thinking, Think and Grow Rich, How to Win Friends and Influence People.

“I do not agree with the popular success literature that says that self-esteem is primarily a matter of mind set, of attitude — that you can psych yourself into peace of mind. Peace of mind comes when your life is in harmony with true principles and values and in no other way.”— Covey

These are great books, by the way. It wasn’t that Covey had a problem with using positive affirmations or taking a course on how to improve your public speaking skills or acquiring financial freedom, but he saw this as a secondary element — a layer of fine accessories and beautifications that should only be added on top of a 1st layer of clothing. The true source of effectiveness was something he called the “Character Ethic” — a way of living life as a human being who valued, deep within their heart, true human principles. (Benjamin Franklin's autobiography is an example of one man’s pursuit of this. See: The 13 Virtues)

Universal principles are the foundation of success, and it’s about time we bring the term back into the public awareness. 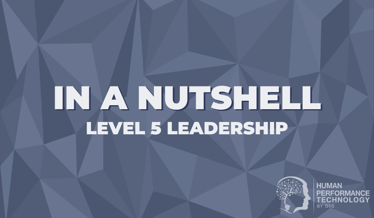 In a Nutshell: Level 5 Leadership