The History of Emotional Intelligence

The scientific field of Emotional Intelligence, as a formal area of study, has been around for 30 years – relatively young as far as sciences go. However, all throughout time we can see a reference made to the power of emotions and their influence over our thoughts, feelings and behaviours.

About 2,000 years ago Plato wrote, “All learning has an emotional base.” Since then, scientists, educators and philosophers have worked to prove or disprove the importance of feelings. Unfortunately, for a large part of those 2000 years, common thought was, “Emotions should be controlled and suppressed; they are in the way of us succeeding.” In the last three decades, a growing body of research is proving just the opposite.

Outlined below is a basic history of the study of emotional and social intelligence, as well as the major contributors. This has been collected from a series of articles, websites and books as a guide to how this field of study has emerged. This is in no way a complete list of all the contributors to the field.

A Brief History of Emotional Intelligence

Plato“All learning has an emotional base.”

Charles Darwin is renowned for his work in the field of biology and more specifically evolution. He contended that it was not the strongest of the species that survives, or the most intelligent, but the one most responsive to change.

He also said “We must, however, acknowledge as it seems to me, that a man with all his noble qualities... still bears in his bodily frame the indelible stamp of his lowly origin”. One way to interpret this is that whilst humankind is responsive and adaptive to change, we are still under the powerful influence of our feelings and emotions.

E.L. Thorndike, an American educational psychologist, in 1920 described a concept he called social intelligence, explaining it as "the ability to understand and manage men and women... [and] to act wisely in human relations." “The best mechanic in a factory,” he wrote, “may fail as a foreman for lack of social intelligence.”

This concept of social intelligence spawned the foundation for the Emotional Intelligence we discuss today. Daniel Goleman has now written another book bearing the title “Social Intelligence.”

In the 1950’s, Abraham Maslow described his hierarchy of needs. The bulk of his hierarchy and the “higher order needs” he describes are emotional needs. He suggests things like friendship, intimacy, family, self-esteem and self-actualisation are higher level driving forces behind our actions, once we have our safety and physiological needs met.

In 1983, Howard Gardner in his book “Frames of Mind: The Theory of Multiple Intelligences” introduced the concept of multiple intelligences. In this book he describes several different intelligences including:

1. Interpersonal intelligence - the capacity to understand the intentions, motivations and desires of other people; and,

2. Interpersonal intelligence - the capacity to understand yourself, to appreciate feelings, fears and motivations.

These two types of intelligence form the foundation for most of the models created on Emotional Intelligence.

John Mayer and Peter Salovey, were trying to develop a scientific measure of the difference between people's ability in the area of emotions. They found that some people were better than others at things like identifying their own feelings, identifying the feelings of others, and solving problems involving emotional issues. They published this in a paper titled "Emotional Intelligence".

Since 1990, these professors have developed two tests to attempt to measure what they call "Emotional Intelligence." Because nearly all of their writing has been done in the academic community, their names and their actual research findings are not widely known.

David Caruso has been in collaboration with Mayer and Salovey for some time and is a co-author of the MSCEIT Emotional Intelligence test as well as many research papers, articles and the like.

In 1992 Daniel Goleman was doing research for a book about emotions when he discovered the 1990 article by Salovey and Mayer. Goleman asked them permission to use the term "Emotional Intelligence" in his book and that permission was granted. Before this, it seems his book was planning to focus on "emotional literacy".

Goleman’s 1995 book “Emotional Intelligence, Why It Can Matter More than IQ” placed the topic into the spotlight, and for that, Goleman is often mistaken as the creator of the term and the concept.

Since then, Goleman has authored/co-authored several books including Primal Leadership, Social Intelligence and Ecological Intelligence. Goleman is considered one of the leaders in the field of Emotional Intelligence. His model is one of the most widely used by individuals and organisations around the world.

Whilst this list is not a complete history of the field of Emotional Intelligence, it does illustrate how far back the principles surrounding this topic go. 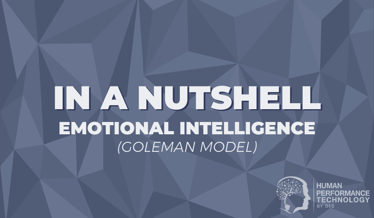