The Perfect Team According to Google Researchers

This article summarises the findings of “Project Aristotle”, in which Google researchers studied what made a team effective at Google. The researchers found that “what really mattered was less about who was on the team, and more about how the team worked together.”

Following on from their extensive research to understand what makes the perfect boss (see Project Oxygen), Google completed the next instalment in the series by cracking the code to the perfect team.

Codenamed “Project Aristotle,” in honour of the Greek philosopher, who said “the whole is greater than the sum of its parts,” Google researchers looked at a range of quantitative and qualitative data over several years to determine the most important elements that make an effective team. (Note: The research is focused on life at Google specifically, but it provides transferable lessons for teams in other companies and industries.)

With all of this data, the team ran over 35 different statistical models on hundreds of variables to identify the team factors that:

The researchers found that what really mattered was less about who is on the team, and more about how the team worked together. The results are summarised in the following Google graphic in order of importance. 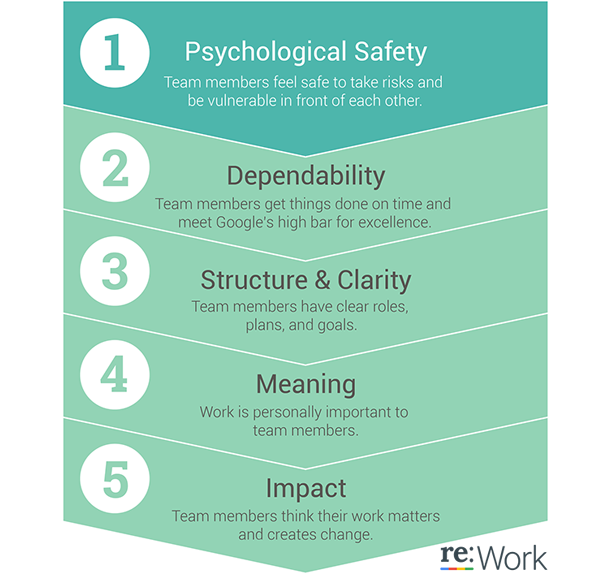 Of the five key dynamics of effective teams that the researchers identified, psychological safety was by far the most important.

In Google’s research, the term psychological safety was defined as “an individual’s perception of the consequences of taking an interpersonal risk or a belief that a team is safe for risk taking in the face of being seen as ignorant, incompetent, negative or disruptive. In a team with high psychological safety, teammates feel safe to take risks around their team members. They feel confident that no one on the team will embarrass or punish anyone else for admitting a mistake, asking a question or offering a new idea.”

An introduction to psychological safety and how to measure it in teams are helpful resources to understand the concept further. We now offer the PS25 tool that measures psychological safety, then meaningfully links the data to your business metrics and key performance indicators. If you’re interested in learning more (no commitment required), please register your interest.

Note: This blog post was originally shared in September 2016, and it was refreshed and republished in November 2020 with up to date information and context.